This past week CEO David Toogood and WSC employee Annette Coleman participated in the Grassroots Advocacy Conference hosted by SourceAmerica. 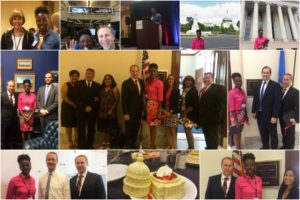 The conference, held in Washington D.C., is an annual event held for employees and Non Profit Agency executives to meet with political leaders to advocate for employment opportunities for individuals with disabilities.

This was the first time attending the conference for both Toogood and Coleman. Both reported progress during their time in D.C. consisting of meetings with the offices of Senator Ted Cruz, Senator James Inhofe, Congressman Mac Thornberry, Congressman Michael Conaway, and Congressman Tom Cole.  During the conference, Coleman addressed a crowd of over 150 representatives from various non-profit agencies across the U.S.

“We don’t look at our situation as a handicap” said Coleman. “I believe we accomplished a goal in advocating for people with disabilities who want to become independent. Nobody can stop you but you”

With the success of the conference, and support of political leaders, Work Services Corporation is reaching out further than ever to provide employment opportunities.

“This was a fantastic and very timely visit to advocate for people with disabilities and to influence legislation, specifically the 2017 National Defense Authorization Act, that will have a profound impact on our mission” – David Toogood, CEO